Somewhat an interesting discussion took off on Twitter between me (@tekkie) and Jason Young of award-winning @virion_ca about the IE6 Update technique. While the goal of such a technique looks decent, it’s mainly of benefit to developers.

What IE6 Update basically does, is to fake the Microsoft-like notification bar on top of the body of the page: 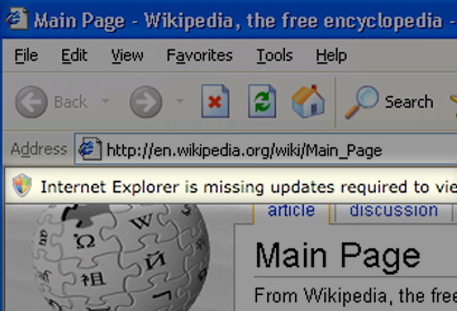 Firstly it may seem like a nice way to convert people from Internet Explorer 6 to whatever there is that is recent from Microsoft, but as Jason quite rightly put it, how transparent is the whole thing? So we end up asking:

It is. By clicking on the bar, user will be taken to the home page of Internet Explorer. That’s all it does. Its JavaScript code is transparent and human-readable, it’s GPL-licenced software as originally coded by Jakob Westhoff for Activebar2.

Is it right to force people to new platforms over the dev effort?

IE6 means no support for 24-bit PNG and for many CSS directives that come in handy on other platforms. It’s a terrible browser and you’d spend hours on workarounds for IE6 that you could otherwise spend on providing better content to the well-equipped audiences. And it’s insecure, open to flaws, worms and all sorts of baddies out there.

Even so, user retains the right to deny the bar. It’s not forced directly.

Is it ethical to throw a bait to unaware users to convert them?

Probably not. Users will have no idea it’s a fake bar. A good fake though, maybe even something that Microsoft should trigger themselves? Actually they have, in a way, because IE8 is available through Automatic Update.

All in all developers make the web and interact with their users, recommending stuff, leading them to directions. It’s really up to every developer to consider what’s best for their audience, but progress through technology is still inevitable. Vorsprung durch Technik.